Vegetables That Start With A

It well known that vegetables are very important part of a healthy diet because of the wide range of essential nutrients, including vitamins, minerals, and fiber.

They are also low in calories, making them a great food choice for weight management.

In addition to being healthy, vegetables are very tasty whether you eat them as a main dish or as a side dish.

You can also prepare them in many different ways, so we invite you to experiment. We bet you will be pleasantly surprised!

If you’re a vegetable lover, there’s a good chance that one of your favorite vegetables starts with the letter A.

However, you may change your mind and prefer other veggies that start with A once you learn more about them and their health benefits.

After all, it’s always a good time to try something new!

Here is our list of some vegetables whose name starts with A, which will hopefully pique your interest in eating a variety of vegetables from this list:

It is a globe-shaped vegetable with a soft heart and edible leaves.

It has has been cultivated for food for over 2,000 years and it has considered a delicacy by the ancient Egyptians and Greeks.

The name “artichoke” comes from the Arabic word for thistle.

The edible part of an artichoke is the heart of the plant and it is located at the base of the vegetable.

The heart is surrounded by layers of leaves, which are also edible. However, the leaves are typically tough and it’s common to be removed before eating.

To prepare an artichoke for eating, we need to cut off the stem and top of the vegetable. When the artichoke is steamed or boiled, leaves can be easily pulled off and the heart will be soft.

The heart can be eaten as it is, or it can be used in recipes such as dips or salads.  Artichokes can also be grilled and even pickled.

This nutritious vegetable offers a wide range of health benefits.

They are a good source of dietary fiber, which helps promote regular bowel movements, digestion and can help lower cholesterol levels.

Artichokes contain high levels of antioxidants which can promote liver health and may reduce the risk of certain types of cancer.

As artichokes are low in calories and high in fiber, they can help you feel full and satisfied, which can help with weight loss.

Asparagus is a green, crisp vegetable with a slightly grassy flavor. It is a perennial vegetable that can be grown for up to 20 years.

It has been cultivated for food for over 2,000 years. Asparagus has been used for food and medicine, also like an aphrodisiac and diuretic.

Asparagus is a low-calorie vegetable with high nutritional value. It is a good source of fiber, vitamins C, E and K, and folate.

Asparagus is high in fiber which can help maintain good digestion and prevent constipation.

The folate in asparagus may help improve your heart health, while vitamins C and E, can help in skin protection from the UV damage and can help skin to look younger and glowing.

It also contains antioxidants and compounds that may have anti-inflammatory and anti-cancer properties.

Asparagus is also a natural diuretic, which means it can help flush excess fluid from the body, making it a great food to eat if you are trying to lose weight or reduce bloating.

Asparagus can be eaten raw, grilled, sautéed, or steamed. 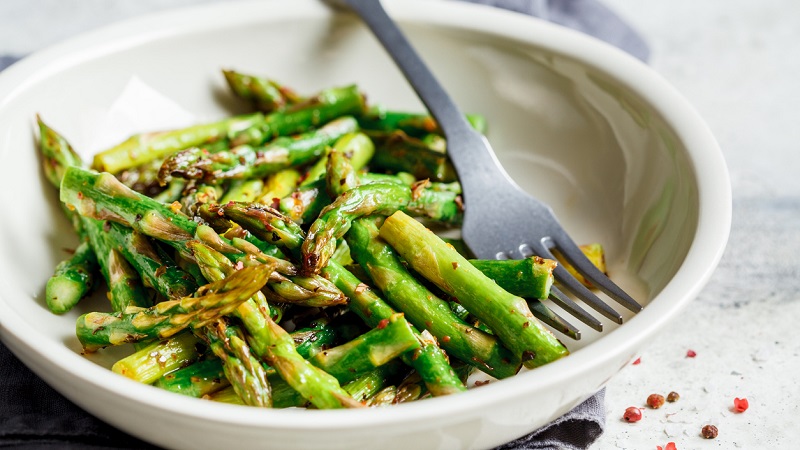 Eggplant, also known as aubergine, is a vegetable that is native in India and is a common ingredient in many cuisines around the world.

It belongs to the nightshade family of plants, which also includes tomatoes and peppers.

Eggplant is typically dark purple in color, although there are also varieties that are white, green, or yellow.

They have a spongy texture and are slightly bitter in taste.

We should always cook eggplants before eating because raw plant can be tough and bitter.

It can be also grilled, fried, roasted, or added to stews and soups

Eggplant is low in calories and a good source of fiber, potassium, and vitamin C.

It also contains a compound called nasunin, which is an antioxidant found in the eggplant skin that can help protect the human cells from the damage.

Eggplant is a good source of folate and vitamin K, and they contain a group of phytochemicals called anthocyanins which have been shown to have anti-inflammatory and anti-cancer properties.

Eggplant is a versatile ingredient and can be used in a variety of dishes, from pasta sauces and pizzas to curries and stir-fries.

Acorn squash is a type of winter squash that is characterized by it’s a corn-like shape, dark green exterior, and yellow-orange flesh.

It is a member of the Cucurbitaceae family, which also includes pumpkins and other types of squash.

Acorn squash is a good source of fiber, vitamin A, and potassium.

It also contains small amounts of other vitamins and minerals such as vitamin C, vitamin B6, folate and magnesium. Additionally, it is low in calories and a good source of antioxidants.

Acorn squash can be prepared in a variety of ways, including baking, roasting, steaming, sautéing, and microwaving.

The flesh is sweet with a slightly creamy texture, and it can be enjoyed as a side dish or added to soups, stews, and casseroles.

Acorn squash is also a good source of beta-carotene, a nutrient that the body converts into Vitamin A which is important for eye health, immune function and skin health.

When choosing an acorn squash, look for one that is heavy for its size and has a dull, hard rind with no soft spots or cracks.

Arugula, also known as rocket, is a leafy green vegetable that is very common in the Mediterranean region.

It is a member of the Brassica family, which also includes other leafy greens such as broccoli, cauliflower, and kale.

Arugula has a distinct flavor and is commonly used in salads, sandwiches, and pasta dishes.

It can be eaten raw or cooked, and it is a good source of vitamins A, K, and C, as well as folate and potassium. Arugula is also a good source of antioxidants and phytochemicals that may have anti-inflammatory and anti-cancer properties.

Arugula can be found in most grocery stores and is available year-round.

When selecting arugula, look for fresh, vibrant-looking leaves and avoid any wilted or yellow.

In addition to its culinary uses, arugula has also been used in traditional medicine for its medical properties.

It is believed to have diuretic, laxative and appetite-stimulating effects.

Adzuki beans are small, reddish beans that originate from China. They are a staple ingredient in many Asian cuisines.

They have a slightly sweet, nutty flavor and a creamy texture.

They are also a good source of various vitamins and minerals, including potassium, magnesium, iron, and zinc.

Adzuki beans can be used in a variety of ways, including as a side dish, in soups and stews, or in sweet dishes such as red bean paste and ice cream.

They are also commonly used in traditional Chinese and Japanese medicine, as they are believed to have detoxifying, blood-purifying, and anti-inflammatory properties.

When purchasing adzuki beans, you should look them dried, canned or in powdered form.

Also note that they should be soaked overnight before cooking. 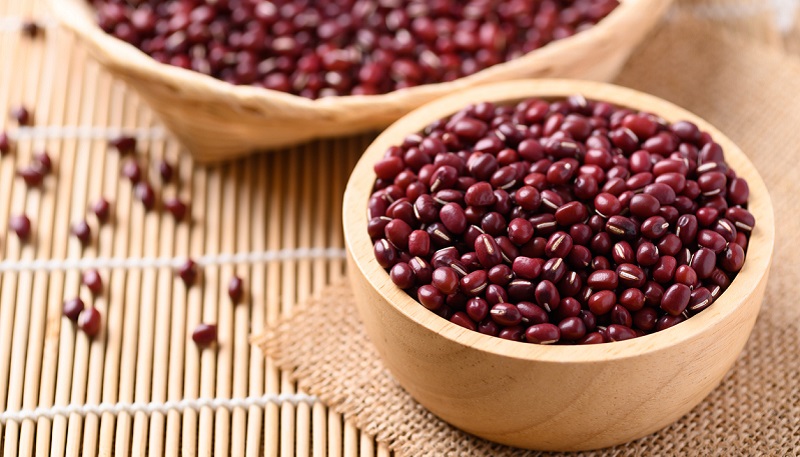 Alfalfa sprouts are sprouted seeds of the alfalfa plant. They are considered to be one of the most popular types of sprouts and are known for their delicate, fresh, and nutty flavor.

They are often used in salads, sandwiches, and as a garnish for soups and other dishes.

Alfalfa sprouts are a good source of nutrients such as vitamins A, C, and K, as well as minerals like calcium and iron.

They are also a good source of antioxidants, protein, fiber, and other essential nutrients that can provide a variety of health benefits.

Alfalfa sprouts are easy to grow at home, and they can also be found at most grocery stores and health food stores.

They should be stored in the refrigerator and consumed within a few days to ensure maximum freshness and nutritional value.

Alfalfa sprouts have been associated with a number of health benefits, including reducing inflammation, improving digestion, and promoting healthy skin and hair.

They are also a good source of phytochemicals like phytoestrogens, which have been linked to a reduced risk of certain cancers, and isoflavones which have been associated with a reduction in menopausal symptoms.

Amaranth leaves are the edible part of the amaranth plant.

They can be used in salads, sandwiches, and as a cooking green in many cuisines around the world, especially in Mexico and Central America.

They have a slightly bitter, earthy taste and they are a good source of vitamins and minerals, such as vitamin C, vitamin K, and iron.

Amaranth leaves are also a good source of antioxidants, phytosterols, and flavonoids, which have been linked to various health benefits such as reducing inflammation and improving heart health.

They also contain high levels of lutein and zeaxanthin, which are important for eye health.

Amaranth leaves are also gluten-free, and it can be a good alternative for people with gluten intolerance or celiac disease.

The leaves can be eaten raw or cooked, and they can be used in a variety of dishes such as soups, stews, and curries.

They can also be used as a substitute for spinach in many recipes.

Amaranth leaves are available in most grocery stores and health food stores, although they may be more difficult to find than other types of greens.

They can also be grown easily in a home garden.

Aracacha, also known as Peruvian carrot, is a vegetable root that is native in South America.

Arracacha has a slightly sweet and nutty flavor, and it is often compared to a combination of parsnip and celery root. It can be eaten cooked or raw and it can be used in a variety of dishes such as soups, stews, and purees.

Arracacha is a good source of carbohydrates and dietary fiber, and it also contains small amounts of vitamins and minerals, including vitamin C and potassium.

The root is typically peeled and then can be grated, mashed, or sliced, and it can be used as a substitute for potatoes in many dishes. It can also be used to make sweet and nutty flavored flour.

Arracacha is not widely available in many parts of the world, but it can be found in Latin America or in specific grocery stores.

Arrowroot is a starchy root vegetable that is very common in Central and South America and Caribbean area.

It is also known as arrowroot starch or arrowroot flour. It is a versatile ingredient that is used as a thickener in cooking and baking, similar to cornstarch.

Arrowroot powder is made by drying and grinding the root of the arrowroot plant. It is gluten-free, and it can be a good alternative for people with gluten intolerance.

It is also considered as a functional food for its health-promoting properties, including its ability to improve digestion, and have excellent antioxidant effects.

Arrowroot powder has a neutral taste and it is a good choice for dishes where you can use it instead of the flour.

Arrowroot powder is available in most health food stores and some grocery stores.

With all of this said, hopefully, you’ve already had your eye on the vegetables beginning with A that you’d love to include in your diet. Go ahead, choose more than one!

We are a group of writers who like to travel the world and get to know different cultures and customs.

Many of us are also cooks who will reveal to you various cooking secrets and suggest you various recipes from different parts of the world.

More about us on this page. 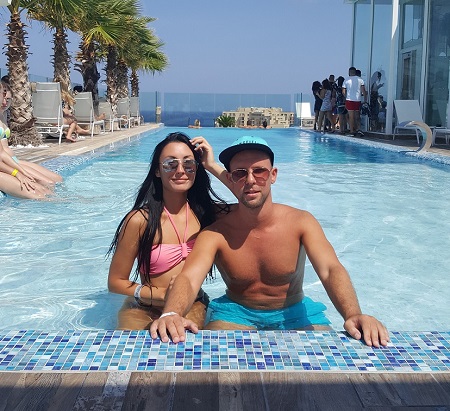